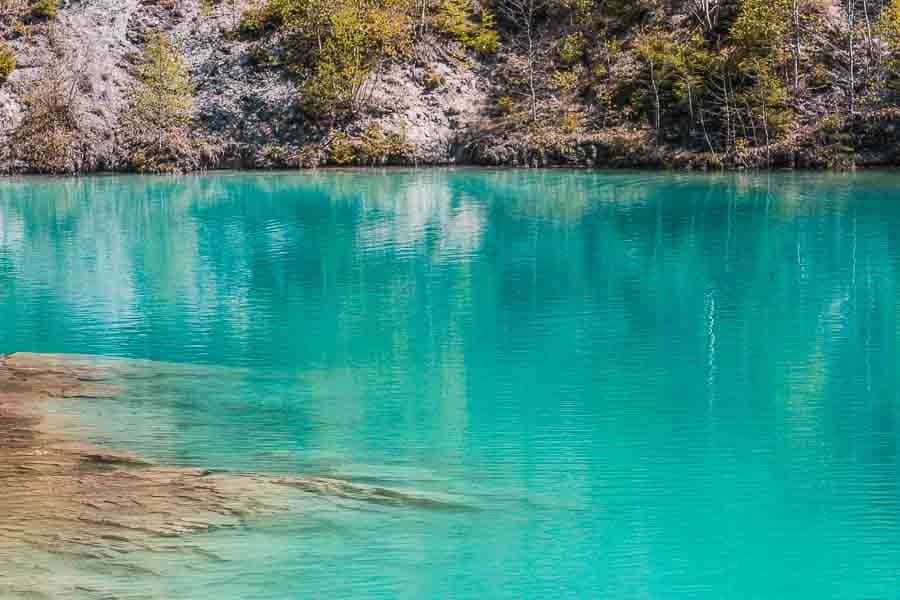 Blue Lake Harz: Especially on sunny spring days the Blue lake in the Harz Mountains lives up to its name. Then its water shimmers turquoise blue and forms an enchanting contrast to bright limestone walls and delicate green of the trees. It is hidden behind the closed limestone quarry at Garkenholz between Hüttenrode and Rübeland. In recent years, the small quarry lake has developed from an insider tip to a popular excursion destination. The classification as a geopoint of the Baumannshöhle landmark in the Harz Geopark certainly contributed to this.

An adventurous circular trail makes the Blue Lake and Quarry interesting for hiking with children. On the tour there are remains of the former lime kiln to be discovered. If you want to hike a bit further, you can walk to the cave village Rübeland. There, Hermannshöhle and Baumannshöhle form exciting underground targets. Both are dripstone caves with a fascinating cave world. The history of its origin is, just like that of the Blue Lake in the Harz Mountains, closely linked to limestone and water.

From a quarry to an idyllic lake: limestone mining in the quarry lasted from around 1885 to 1945. In the years that followed, the abandoned limestone quarry turned into a scenic gem. Water collected in the bottom of the pond and steep edges now form the shore of a small pond. It is fed by Karstquellen but also by rainwater and can be up to 15 meters deep. But the lake water slowly seeps away into the fine cracks of the calcareous subsoil. If there is not enough water, the quarry lake can dry up completely.

Blue Lake Harz – Its colors change the water with the season

The picturesque lake usually appears really blue in spring. The lake owes its blue colour to its high lime content. When the highly calcium-rich water from the karst in the quarry comes to light, it precipitates considerable amounts of calcium carbonate. This binds suspended matter and algae and forms a lime mud layer on the soil. Clean, nutrient-poor water is the result, which reflects the blue portions of the sunlight. Then it’s literally a blue lake.

Under the spring sun the water glows turquoise blue or even azure blue. As if painted, it stands out under the blue sky from the greening plants and bright limestone walls of the bank. Its colours shimmer in the sunlight – against this backdrop, a family excursion with children on the Blue lake in the Harz mountains becomes a relaxing experience.

Video Blue Lake Harz: The blue color of the lake and the beautiful nature surrounding it invite you to swim and picnic.

Later in the year, when rain and suspended particles enrich the water with nutrients, algae grow again. Then the lake loses its blue color and the water of the blue lake shimmers rather green. Although bathing is officially not allowed, in summer often bathing enthusiasts and families with children populate the lake shore. For sunbathing, jumping stones on the water and hiking in untouched nature the place is just right. From a landscape and geological point of view, the Blue Lake is worth an excursion at any time of the year.

Mother Nature has already closed many of the wounds of lime mining. In the meantime, all kinds of plants thrive around the Blue Lake and provide valuable habitats for large and small animals. For attentive observers there is much to discover. For this and the beautiful view, the hiking tour around the abandoned quarry is worthwhile. However, the unspoilt hiking trail is a bit difficult in places, the shore often drops steeply.

For those interested in geology, an excursion to the limestone quarry at Garkenholz is particularly exciting. The steep abyss edges are still barren and not overgrown. The limestone is exposed and easily visible. As a geotope, the Blue Lake in the Harz offers insights into the geological history of the earth. It is registered on the list of the Geopark Harz as geopoint 2 of landmark 13.

The use of GPS devices for hiking is becoming more and more popular. In addition to the top dog Garmin, there are other suppliers of various devices. The devices are often optimized for a special purpose and represent an alternative or supplement to the classic hiking map and the usual path markings in hiking areas. We are interested in how widespread the use in practice actually is. Please note our Privacy Policy before taking part in the vote.

Lakes and ponds characterise the Harz landscape and bear witness to centuries of mining tradition. The Blue Lake is developing into one of the most popular excursion destinations in the region around Elbingerode and a visit is worthwhile. Also for hikers in the holiday region Wernigerode, Blankenburg and Thale a detour to the Blue Lake in the Harz Mountains is an ideal option.

Thanks to its proximity to the main road, the Blue Lake is also easily accessible by car for excursionists from the Oberharz. A parking lot is only a few hundred meters away on the federal highway. The Blue Lake is halfway between Rübeland and Hüttenrode. From Oberharz drive in the direction of Elbingerode. From Rübeland you drive about 10 minutes to the Blaue See. Alternatively you can reach the lake from Blankenburg via Hüttenrode. 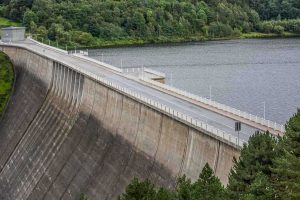 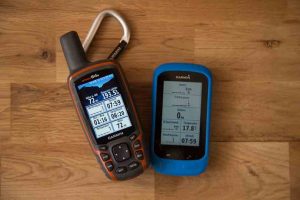 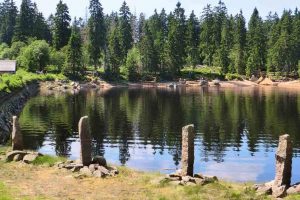 Enjoy Wellness & Nature in the Harz

X
On this page we collect anonymous statistical data about the use of our website. This data is processed by Google Analytics. This helps us to optimise our website. Nevertheless, you may of course decide for yourself whether this is ok for you. In the privacy policy you can revoke your settings at any time. AcceptDeny
Cookie-Einstellungen widerrufen / Revoke cookie settings